With the continuous improvement of human environmental protection needs and the excessive development of petrochemical energy, wind energy, a renewable and clean energy source, has received extensive attention. Offshore wind power has many advantages such as environmental protection, cleanliness, rich resources, and no land occupation. In order to achieve the goals of "carbon peak" and "carbon neutrality", in recent years, my country has vigorously encouraged the development and promotion of offshore wind power energy, and the construction of offshore wind power projects is in full swing.


Let us take an inventory of those offshore wind power operation platforms with the GENMA mark.

■"Huadian 1001" (formerly Runbang No. 1) was built at the end of 2012 and is the first professional working platform for offshore wind power installation in Asia.

The hull of the platform was built by Runbang Marine, a brother unit of Runbang Heavy Machinery. It uses a GENMA 2500 ton hydraulic bolt screw lifting system, a GENMA 700 ton and a 200 ton offshore crane, which provided the early offshore wind power hoisting operations in my country. Powerful assistance.

It is reported that the "Huadian 1001" offshore wind power operation platform has successfully completed the construction of the meteorological observation tower and the installation of 30 wind turbines in Fuhai, Taiwan. After acceptance by the owner and the supervision unit, the verticality of single pile foundation sinking is 1/700, and the elevation error is -10 mm, and the high standard meets the engineering design requirements. The "resumes" of "Huadian 1001" in the past ten years fully verified the strong design and manufacturing capabilities of the GENMA brand in the field of offshore engineering equipment. 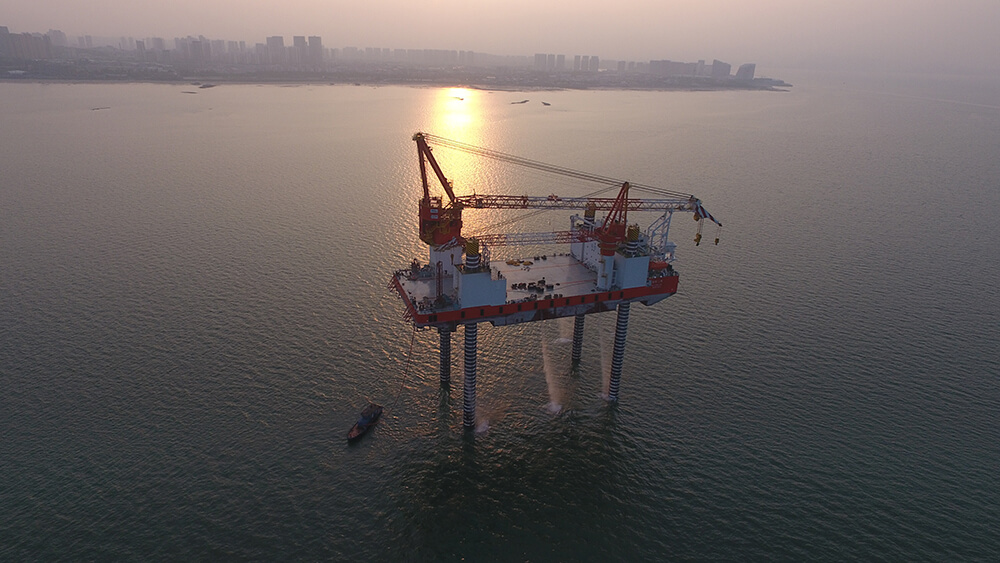 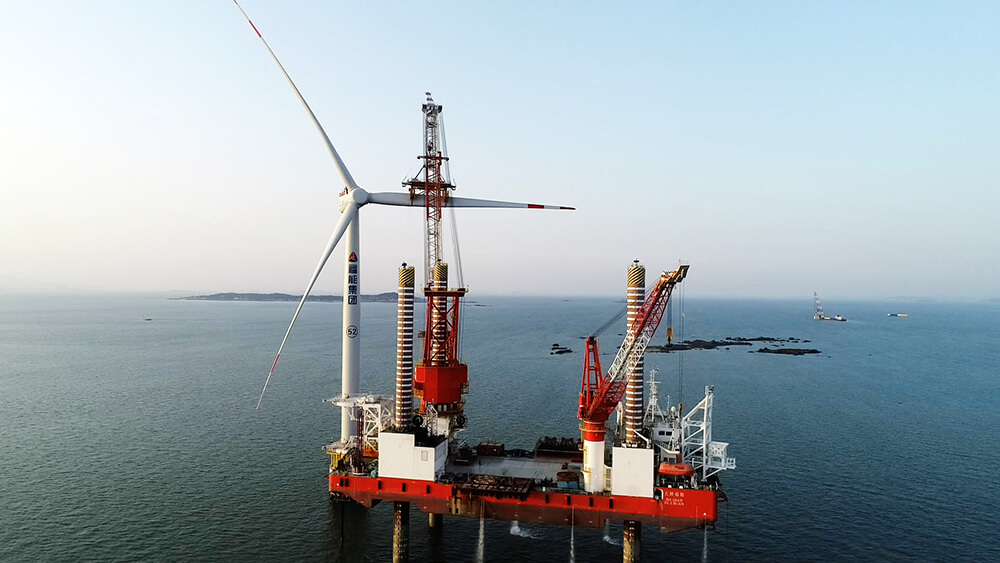 The "Fu Chuan Sanxia" and the "Daqiao Fu Chuan" were built in 2017 and 2018 respectively. The two platform hulls were built by Xiamen Shipbuilding Industry Co., Ltd., using GENMA, two sets of 4000-ton hydraulic bolt-type lifting systems, and two GENMA 200-ton offshore cranes and two 1,000-ton pile-wound cranes jointly developed by Runbang Heavy Machinery and GustoMSC. The platform is mainly used for wind turbine hoisting, pile foundation construction, and offshore salvage operations. The working area is more than 2500 square meters, and it has the site scale and lifting capacity for installation and assembly at the same time.

In May 2021, the "Huadian Wenqiang" wind power platform project team completed the installation of 12 Mingyang smart 6.45 MW wind turbines, setting a new record for the installation of large MW units of offshore wind power in China in a single month, greatly shortening The construction period saves costs for the builder. 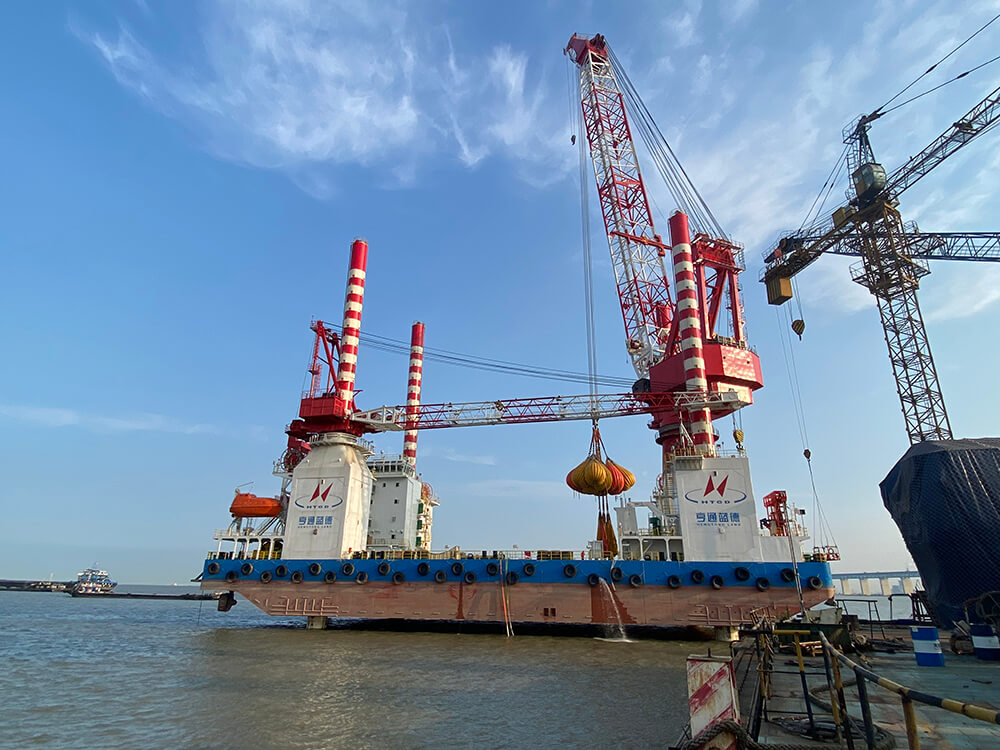 In 2018, Runbang Heavy Machinery successfully delivered two GENMA 2000-ton hydraulic bolt lift systems designed and built for West China Offshore Wind Power and Hengtong Offshore. As one of the main equipment of the platform, the GENMA hydraulic bolt lifting system has the functions of platform tilt protection and self-locking after power loss.

Under the tide of wind power installation, the installation speed and efficiency of offshore wind turbines directly determine the grid connection time and benefits of the project. Compared with the traditional step-type lifting system, the GENMA hydraulic bolt-type lifting system adopted by the platform doubles the lifting speed of the platform, which greatly improves the efficiency and benefits of offshore wind farm construction operations.

Recently, the "Tengdong 001" (formerly "Desheng 287") offshore operation platform was successfully delivered at the Guangxi Company of China State Shipbuilding Corporation, which means that the GENMA 600-ton full-slewing offshore crane equipped on the platform will soon be put into use.

The GENMA 600-ton full-slewing offshore crane equipment has the characteristics of stable performance, light weight, strong lifting capacity, flexible operation, and it can still achieve slewing operations at full load. It is believed that after being officially put into use, GENMA Offshore Crane will give full play to its high efficiency and stability characteristics, make efforts to install offshore wind power, and escort customers to complete offshore installation tasks.


Runbang Heavy Machinery is one of the first domestic enterprises to enter the field of wind power installation equipment. After more than ten years of development, the GENMA marine engineering series products of Runbang Heavy Machinery have left a brand mark on many domestic jack-up platforms and work boats. . At the same time, with the use of GENMA's various offshore engineering equipment, the company's strong R&D strength and good service capabilities have also been recognized by many parties.

In the future, Runbang Heavy Machinery will rely on its rich industry experience and actively leverage its professional advantages to continue to promote the high-quality development of the wind power industry and contribute to the realization of the dual-carbon goal!